Posterior vitreous detachment is an ocular condition consisting of a “disconnection” between two sections of the eye, the retina and the vitreous humour, the transparent gelatinous mass of which the eyeball is composed.

Posterior vitreous detachment is quite common in older people (about 60% of people over 65 years of age are affected), so it is more of a physiological condition due to a change in the composition of the vitreous humour than a real eye disease. Advancing age favours the process of degeneration of the vitreous humour (known as vitreous syneresis): the vitreous becomes more fluid and gaps may form in it, that affect the subject’s visual capacity, which appears worsened due to the continuous vision of shadows or the presence of mobile bodies or myodesopias (the so-called “floaters”).

Sometimes posterior vitreous detachment can occur without any particular symptoms being reported. In other cases, however, it may be preceded by a general worsening of visual capacity, with the appearance of phosphenes (similar to “flashes of light”, present even in the dark and with the eyes closed) or the aforementioned myodesopias, which appear as mobile, circular or filamentous “spots” that are permanently present in one’s field of vision.

Apart from ageing, other causes related to posterior vitreous detachment can be inflammation and trauma to the eye, surgery or severe myopia, or, in general, dehydration of the body. 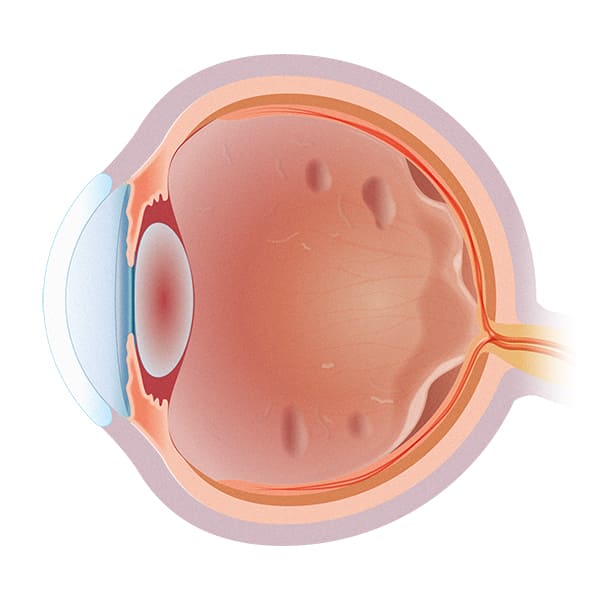 The diagnosis of posterior vitreous detachment is made by a medical specialist, the ophthalmologist, following a check-up and a thorough examination of the ocular fundus, which allows the general state of health of the vitreous and the presence of any retinal break to be checked.
The specialist may ask for further tests such as an ocular ultrasound scan or an OCT.
Following these assessments, the specialist will provide guidance on how best to handle the situation.

It is true to say that there is currently no real cure for posterior vitreous detachment.
Generally, as time passes, the typical symptoms of this condition may appear less noticeable and annoying, due to a natural adaptation by the brain. Improvement may also come from eating a healthy diet, rich in fruit and vegetables, combined with proper hydration and taking supplements prescribed by the specialist.

In the case of retinal damage resulting from vitreous detachment, the ophthalmologist may prescribe a photocoagulation laser treatment; in more serious and complex cases, surgery may be necessary.