Glaucoma is an opticopathy (i.e. a pathology of the optic nerve) associated with increased intraocular pressure. It differs from the isolated form of ocular hypertension, in which the abnormal accumulation of aqueous humour (the transparent liquid that fills the anterior part of the eyeball), which does not drain properly, does not cause damage to the optic nerve.

In glaucoma, damage to the optic nerve manifests itself as a progressive worsening of visual capacity, leading to blindness in the most severe cases.

No precise causes of glaucoma have been identified. In general, it can be said that there are several factors that can increase the risk of developing this eye disease, such as the presence of other cases among relatives (familiarity), a particular anatomical conformation of the eye, myopia, an age of over 60 years, eye trauma, unsuccessful surgery, prolonged intake of certain types of drugs and the presence of particular diseases (such as diabetes or hypertension).

Glaucoma is a progressive disease and, in its early stages, does not manifest itself with any particular symptoms. Over time, however, some typical symptoms may occur, such as: 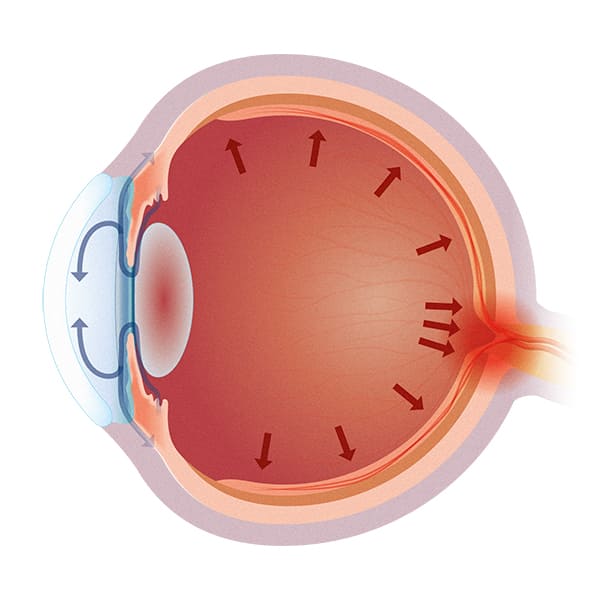 The diagnosis of glaucoma is made by a medical specialist, the ophthalmologist, following an examination and after various tests have been carried out to check the pressure inside the eye, the appearance of the optic nerve and the thickness of the cornea.

As glaucoma is a progressive disease, it is essential to diagnose it as early as possible to prevent permanent damage to vision. For this reason, it is advisable, especially in the presence of risk factors, to have regular eye examinations and any screening tests requested by the ophthalmologist.

The progression of glaucoma can be slowed down with intraocular pressure-lowering therapy, which must be followed throughout life.

In milder cases of glaucoma, the specialist may prescribe hypotonic eye drops, which promote the outflow of aqueous humour, thus decreasing the pressure inside the eye.

In acute or more severe cases of glaucoma, however, it may be necessary to take oral or intravenous medication, undergo laser treatment or surgery to help draining of excessive aqueous humour and to restore normal intraocular pressure.